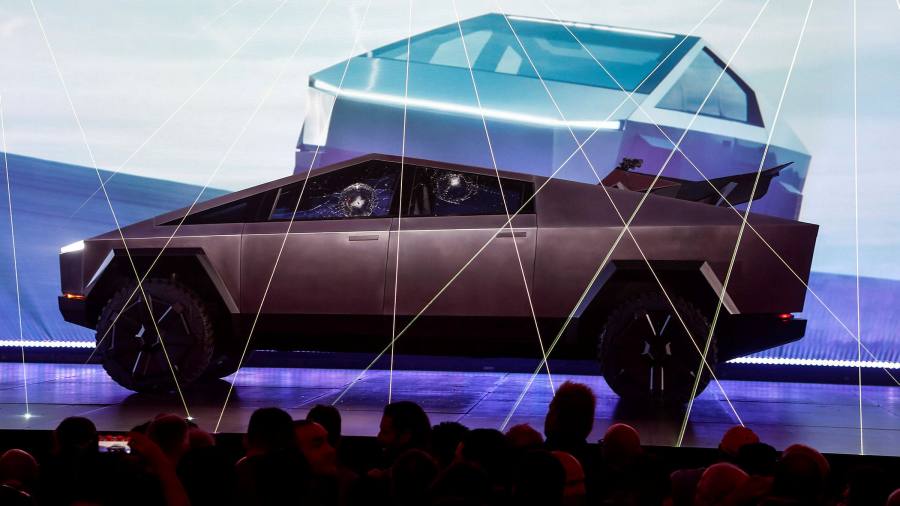 Americans love pick-up trucks. Carmakers hope they will get a jolt of excitement from electric ones too.

When Ford unveiled the F-150 Lightning last month, it became the latest US carmaker to unveil a product to compete in a segment that comprised about 20 per cent of the US auto market’s 14.4m sales in 2020. The field is becoming crowded with Rivian scheduled to deliver the first R1Ts in July, General Motor’s GMC Hummer coming this autumn and Tesla’s space age-looking Cybertruck likely to go on sale next year.

Electric vehicles comprised about 3.2 per cent of the US auto market in April, according to research firm JD Power and Associates. That share could grow if Americans embrace the new electrified entrants: a January survey from Cox Automotive found that two out of five consumers shopping for a pick-up in the next two years was considering an electric model.

But success will hinge on whether electric pick-ups can draw in new buyers, including urban cowboys and commercial fleet operators. Traditional retail pick-up buyers may prove harder to entice because towing a heavy load — an important feature for many buyers — shrinks the distance an electric truck can drive before it needs to recharge. EVs also carry a perceived association with affluence and liberal politics, while pick-up trucks typically sell better in the more conservative US south and central regions.

“We definitely see in surveying that there is interest,” said Cox Automotive analyst Michelle Krebs. “The question is, how many of these people are there, who are they, and who will they buy from?”

“There are a lot of players headed to that market,” she added. “Is the pie big enough for everyone to have a piece that is profitable?”

The US market is dominated by light vehicle sales, a category that includes vans, pick-ups and sport utility vehicles. In 2020, cars only made up a quarter of US vehicle sales. Yet the most visible EV models in the US have all been cars, including the Toyota Prius, Chevrolet Bolt and Tesla Model 3.

In the past two years, electric vehicles’ share of the US car market has nearly doubled from 1.7 per cent. Tesla’s Model Y and Ford’s Mustang Mach-E helped drive that growth, said Tyson Jominy, JD Power’s vice-president of data and analytics. It was “really the first the time we’re giving Americans what they want — SUVs — as opposed to giving them hatchbacks. The only thing Americans were most distrustful of than EVs were hatchbacks.”

Because pick-ups are such a large market, a carmaker only needs to capture a small percentage to sell significant volume, Jominy said.

The Lightning is critical for Ford because the F-150 is the Dearborn, Michigan’s flagship franchise. The company says it has 70,000 purchase reservations for the pick-up. Rival GM plans to follow the GMC Hummer, which revives the name of the archetypal early 2000s gas-guzzler, with an electric version of the Chevrolet Silverado.

The field of EV-only companies includes Tesla and Rivian, as well as smaller players such as Bollinger Motors and Lordstown Motors. Ohio-based Lordstown, which has attracted the scrutiny of federal regulators over claims, which it denies, that it overstated its pre-orders, said it would need to slash its annual production plans and raise additional capital.

Tesla, with the Cybertruck’s distinctive stainless steel exterior, and Rivian, with a $75,000 starting price on the R1T, are targeting lifestyle buyers who may not have owned a pick-up before but are intrigued by the prospect of an electric one.

Ford is heavily marketing the F-150 Lightning to commercial customers, who often are more focused on a vehicle’s maintenance and fuelling costs rather than the sticker price alone. The truck is priced at $40,000 to start and can be used at a worksite as a generator.

Jay Darling, president at Darling’s dealership in Bangor, Maine, said he had 80 reservations to buy the Lightning, compared with roughly 65 for the Bronco, Ford’s competitor to the Jeep. Many of the customers operate fleets. Several of the reservations come from solar power companies.

“The newer [F-150 hybrid] PowerBoost and the Lightning seem to be hitting a mark that consumers want and, in particular, businesses,” he said.

But electric pick-ups, at least at first, will not be as profitable for carmakers as pick-ups, vans or SUVs with internal combustion engines. Automakers command higher prices selling “cars by the pound”, yielding greater profits compared to smaller vehicles. The higher costs to manufacture an electric vehicle eat into that margin.

GM chief financial officer Paul Jacobson said on Thursday that the company’s new battery technology, Ultium, cost 40 per cent less than the batteries used in existing Chevy Bolts, and GM aims for a total reduction of 60 per cent by 2025.

“We’ve targeted about a 10 per cent margin,” he said. “That’s been in place for a long time, and I think we’re making great strides to there . . . We’ve got a good trajectory to manage through that transition [from petrol to electric] and keep those margins intact.”

Besides watching profit margins, manufacturers also will need to convince would-be buyers that an electric pick-up has the same capacity as a traditional pick-up. Hauling a boat or camper eats into how many miles an electric pick-up can drive without needing to recharge, and “unless the lake is 150 miles or less from your home . . . it does start to limit what you can do”, Jominy said. Even though pick-up owners may only need to tow a couple of times a year, they are unlikely to want to compromise on power, again suggesting that for manufacturers “to be successful they’re going to have to attract new customers to pick-ups”.

There are also questions about customer acceptance in parts of the US where pick-ups are popular, but political conservatism feeds scepticism of electric vehicles.

Pam Cotton Conn owns a dealership in Carol Stream, Illinois. She said she was “ridiculously excited” about the F-150 Lightning, with a front trunk where the engine used to be and business owners’ potential to save on gas and maintenance. She advertised the truck’s unveiling to the dealership’s customer base and received an email from a man annoyed by the new product’s perceived political ramifications.

But that was a single person on a 19,000-strong mailing list, she noted, and for those who prefer trucks with traditional engines, they are still for sale.