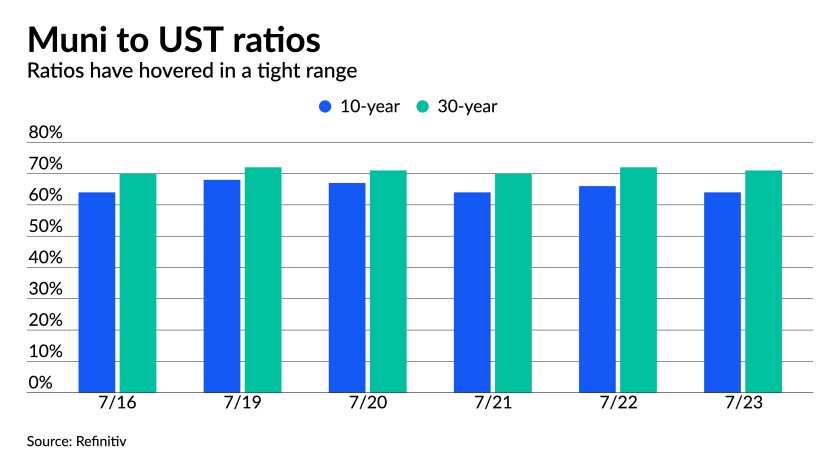 Municipals were steady in typical summer Friday style ahead of a less-than-robust new-issue calendar to end July.

The U.S. Treasury 10-year ends 10 basis points higher than it started the week, but back to levels of a week ago, while the stock market rallied and earnings pushed them to all-time record highs Friday.

The total potential volume for next week is estimated at $6.356 billion, down from total sales of $8.653 billion this week while 30-day visible supply is pegged at $9.4 billion.

Washington along with King County, Washington, and Philadelphia lead the slate with various negotiated and competitive exempt and taxable general obligation bonds. The housing and utility sectors also are well represented.

With about $60 billion coming due and it being very unlikely for new issuance to hit that figure, the supply-demand imbalance is severe and keeping municipal performance strong.

And while munis saw pressure out longer this week, participants say it’s likely short-lived. Between mutual funds, the constrained supply and overall credit positives the sector is seeing, it is hard to see any major headwinds in the near-term.

“In our view, this is temporary, and, if rates remain in check, an opportunity to add,” Barclays strategists Mikhail Foux, Clare Pickering and Mayur Patel said in a Friday report. “We believe that the yield curves could continue to flatten in the near term as long-term retail inflows continue to provide support for the market … while mutual funds have sizable cash balances. Supply is a running a bit heavier than expected for this time of the year, but there is ample appetite to absorb the pipeline even though some tightly traded deals saw some investor pushback this week.”

“We still see this muni sub-sector as well supported, despite rather rich valuations,” they wrote. “AAAs and AAs will see strong demand from life insurers, incentivized by changes in the NAIC’s risk weightings, and some BBB credits are still attractive enough versus similarly rated corporates with relatively few credit concerns on the horizon.”

Ratios continue to hold at historically low levels also as a result. Nuveen noted that after reaching historical highs in 2020, the 10-year municipal-to-Treasury yield ratio moved from 64% to 66% during the second quarter, versus a long-term average of 85% while the 30-year ratio dipped into the 60% range during the quarter, but ultimately ended the quarter steady at 70% compared to a long-term average of 93%.

Any potential weakness could be modest at best given the extremely strong demand from mutual funds and exchange-traded funds, according to JB Golden, executive director and portfolio manager at Advisors Asset Management.

“The unceasing wave of post-pandemic inflows continues and the amount of money entering the market this year has been nothing short of astounding,” Golden said.

While there may be some concern and market pressure over the resurgence of the COVID-19 Delta variant and the potential impact it could have on state and local governments, Golden said, it seems more technical in nature than fundamental.

“There have been a host of supportive tailwinds for the asset class this year, including a healthy political backdrop, a credit backstop in the form of the $1.9 trillion American Rescue Plan Act, concern over higher taxes, and a lack of safe haven alternatives,” he said. “This has supported strong demand that has stretched valuations to the point of eroding the value proposition associated with tax-exempt municipals.”

The 10-year ratio has averaged about 63% to 64% since the mid-February 2021 selloff on the back of higher interest rates, he said.

While Golden and others noted the ratio has dipped below 63% a few times in the last several months, “it tends to bottom and bounce once it has breached that level.”

Somewhere below 63%, the value proposition in municipals erodes and it no longer remains rational to favor municipals over Treasuries, he noted.

“We entered the last Treasury rally sitting at approximately 62% on the 10-year municipal to Treasury ratio and we think it doesn’t make sense for them to go much lower,” Golden said.

Secondary trading and scales
Trading on the short end showed steady prints and the one-year high-grade holding tight at 0.05%.

There were not many prints around the 10- to 15-year to point to.

FOMC preview
While analysts agree the Federal Open Market Committee’s post-meeting statement next week will likely be little changed from the previous one, they have a laundry list of clarifications they’d like from Chair Jerome Powell’s press conference or the meeting minutes.

Any clues about tapering or rate hikes would get a big reaction from markets.

David Page, head of macro research at AXA Investment Managers, expects the Fed to exit its asset purchases after six months of tapering. “News that the Fed is considering something faster would likely send yields higher sharply,” he said. Such news, he noted, would likely be gleaned from the minutes, rather than a press conference or statement.

Any tapering talk will interest Rhea Thomas, senior economist at Wilmington Trust, be it “at the meeting, in the press conference, or in subsequent speeches by other Fed officials.”

And Ariel Acuna, founder and CEO at LTG Capital, LLC/The Aqueduct Strategy, expects “the Fed to shed some light on when they anticipate beginning to slow their monthly bond purchases.”

“At this point, the Fed has projected two rate hikes by year end 2023,” he noted. “This contradicts the messaging that inflationary pressures are transitory. We are looking for clarity on this topic.”

Some, like Wilmington’s Thomas, expect more “concrete information” about defining “substantial progress” to come out during the Jackson Hole symposium. They see tapering beginning “in late-2021 or early-2022 at a pace of $10 billion per month, with the option to increase or decrease that rate depending on economic conditions,” she said.

If tapering goes according to plan, Thomas added, rate hike could start in 2023.

“If the economy continues to improve and tapering progresses smoothly, the Fed could commence hiking rates in 2023.”

Also of interest to Thomas is “how the Fed is incorporating the rising concern around the Delta variant into its growth outlook and also the Fed’s reaction to the slump in the 10 year yield.”

But AXA’s Page thinks the FOMC will need more time to figure out a taper plan and doesn’t anticipate a big announcement at Jackson Hole. He expects the Fed to issue a “warning” of coming tapering in September, followed by a taper announcement in December.

At Jackson Hole, the chair could say “something that suggests that a decision is imminent, perhaps specifically referring to the September meeting,” Page said, “but we see no reason why he would want to commit” except through an official FOMC meeting.

Of course, the “markets will closely watch for any signs that the Fed is starting to doubt its transitory inflation explanation,” he added, noting, “we do not expect Powell to provide any here.”

The Massachusetts Institute of Technology (Aaa/AAA//) is set to price $225 million of corporate CUSIP bonds on Tuesday. Barclays Capital Inc.

In the competitive market, King County, Washington, will sell $334 million of general obligation bonds at 9 a.m. eastern on Tuesday.

Christine Albano contributed to this report.