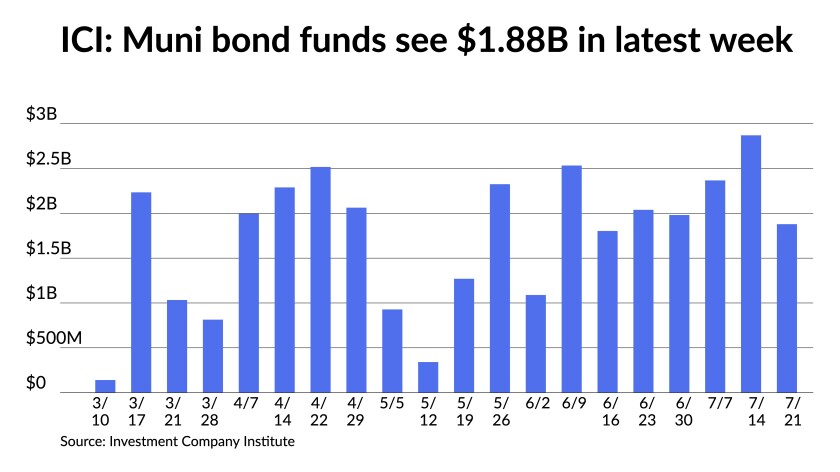 Municipals were a touch weaker outside of 15 years Wednesday as U.S. Treasury yields rose after the Federal Open Market Committee minutes were released but pared back losses as the afternoon progressed and were back at Tuesday’s levels near the close.

The tapering conversation continues, but Federal Reserve Board Chair Jerome Powell said the FOMC has made no decisions on timing.

Municipals largely sat on the sidelines as trading was light and few new-issues priced. Shorter trades did show firmer prints while out longer, they were mixed but long benchmark yields rose a basis point or two.

The massive summer reinvestments continue and are both sustaining the strength of investor demand and solidifying the technical footing of the market.

Exchange-traded funds saw $458 million of inflows versus $562 million the week before.

Separately, while the bipartisan group of senators in Washington reached an agreement on a $500 billion-plus infrastructure plan to be voted on as soon as Wednesday evening, it lacked any of the municipal market’s desired bond programs, such as direct-pay taxable bonds or tax-exempt advanced refundings.

Sources say they were stripped from the compromise deal and would likely be put into the larger tax and social spending package Democrats hope to get through Congress later this year.

Getting these deals done still face hurdles and much remains uncertain. Often municipal provisions are overlooked or tabled in last-minute negotiations.

As many issuers await more details from Washington on infrastructure, some participants say they are holding off on major investments and issuing new-money as a result. Visible supply is a mere $8.4 billion, according to Bond Buyer data, making for $25 billion of net negative supply, according to Bloomberg data.

The market awaits bellwether Washington (Aaa/AA+/AA+/), which will sell $316 million of general obligation bonds at 10:30 a.m. eastern and $282 million of GOs at 11 a.m. eastern Thursday.

The average seven-day simple yield for the 157 tax-free and municipal money-market funds remained at 0.01% from the previous week.

Taxable money-fund assets rose by $45.40 billion in the week ended July 27, bringing total net assets to $4.352 trillion. The average, seven-day simple yield for the 763 taxable reporting funds remained at 0.01% from the prior week.

No clarity on tapering
The tapering conversation continues, but Federal Reserve Board Chair Jerome Powell called the FOMC’s discussion at this meeting “the first deep dive” on the pace and composition of the purchases.

“The Fed took another small step forward in their patient and methodical path towards tapering of their bond buying program,” said Jason England, global bonds portfolio manager at Janus Henderson Investors. With talk of progress toward its dual mandate and vows to provide advance notice of tapering, Janus maintains “tapering won’t begin until early next year.”

“Given the chorus of pricing pressures announced this earnings season and as employers continue to struggle in finding talent, mission accomplished still seems to be in the distant future,” said Ed Moya senior market analyst for the Americas at OANDA.

“Uncertainty for the Fed’s baseline to the outlook should solidify a dovish stance that could make the earliest for a taper announcement to be in September,” he said, echoing comments make earlier in a Bond Buyer podcast.

Members have “a range of views on timing,” Powell said. When asked, Powell said, he doesn’t expect an emphasis on cutting mortgage-backed purchases quicker than Treasuries. He also wouldn’t comment on the possibility of a statement being made during the Jackson Hole summit.

“Progress,” but not “substantial further progress” has been made toward the Federal Reserve’s dual mandate, according to the post-meeting statement, suggesting the panel is getting closer to tapering. In his press conference, Powell said, “the labor market still has a ways to go,” noting the high number of Americans without jobs and the low participation rate.

In its post-meeting statement, the FOMC noted its December commitment to buy $80 billion of Treasury securities and $40 billion of agency mortgage‑backed securities until “until substantial further progress has been made toward its maximum employment and price stability goals.” The statement continues: “Since then, the economy has made progress toward these goals,” and the panel will continue to assess progress at future meetings.

“I think that was a big change,” said Tom Porcelli, managing director and chief U.S. economist at RBC Capital Markets. “It is the Fed teeing up tapering.”

The change is “another incremental step toward tapering,” said Gary Pzegeo, head of fixed income at CIBC Private Wealth, U.S. “If markets accept the tweak in the Fed’s statement we could see them announce a schedule of tapered asset purchasing later in the year.”

The panel also held interest rates at the zero-lower bound. There were no dissenting votes.

Pointing to noticeable increases in inflation, the chair said above 2% numbers will increase for some more months as a result of unresolved bottlenecks. He said he considers these rises transitory because they are “not broad-based across the economy.” The increases mostly the result of jumps in certain categories that “won’t go on indefinitely.

The near-term inflationary risks are probably to the upside, he said, although he doesn’t expect the Delta variant to greatly impact the economy, as each time a variant arose, the economic impact was less than earlier hits.

“We’re already seeing significant inflationary pressures throughout the economy,” said Gary Zimmerman, CEO of MaxMyInterest. “While the Fed must walk a careful line between sustaining an economic recovery and avoiding runaway inflation, the fiscal stimulus planned by the federal government should pave the way for the Fed to begin paring back its dovish monetary policy.”

“I expect Chairman Powell will condition the market to expect an acceleration of the Fed’s plan to taper asset purchases, affording the Fed the flexibility to implement rate increases earlier in 2022 than had been previously articulated,” he said, expanding on his thoughts in a commentary.

As for rate hikes, Powell told reporters, that’s “not on our radar screen now.”

Wage hikes are not troubling, since it’s the lowest-paid workers who are making the biggest gains and these are not showing up in unit labor costs, Powell said.

Powell often deferred questions, such as timing of taper and the definition of substantial further progress, by saying that needs to be a panel decision, not his alone.

“He is trying to strike the right balance between what he thinks and the thoughts of his colleagues,” said RBC’s Porcelli. “But clearly, he is on one side and multiple of his colleagues are on the other side.”