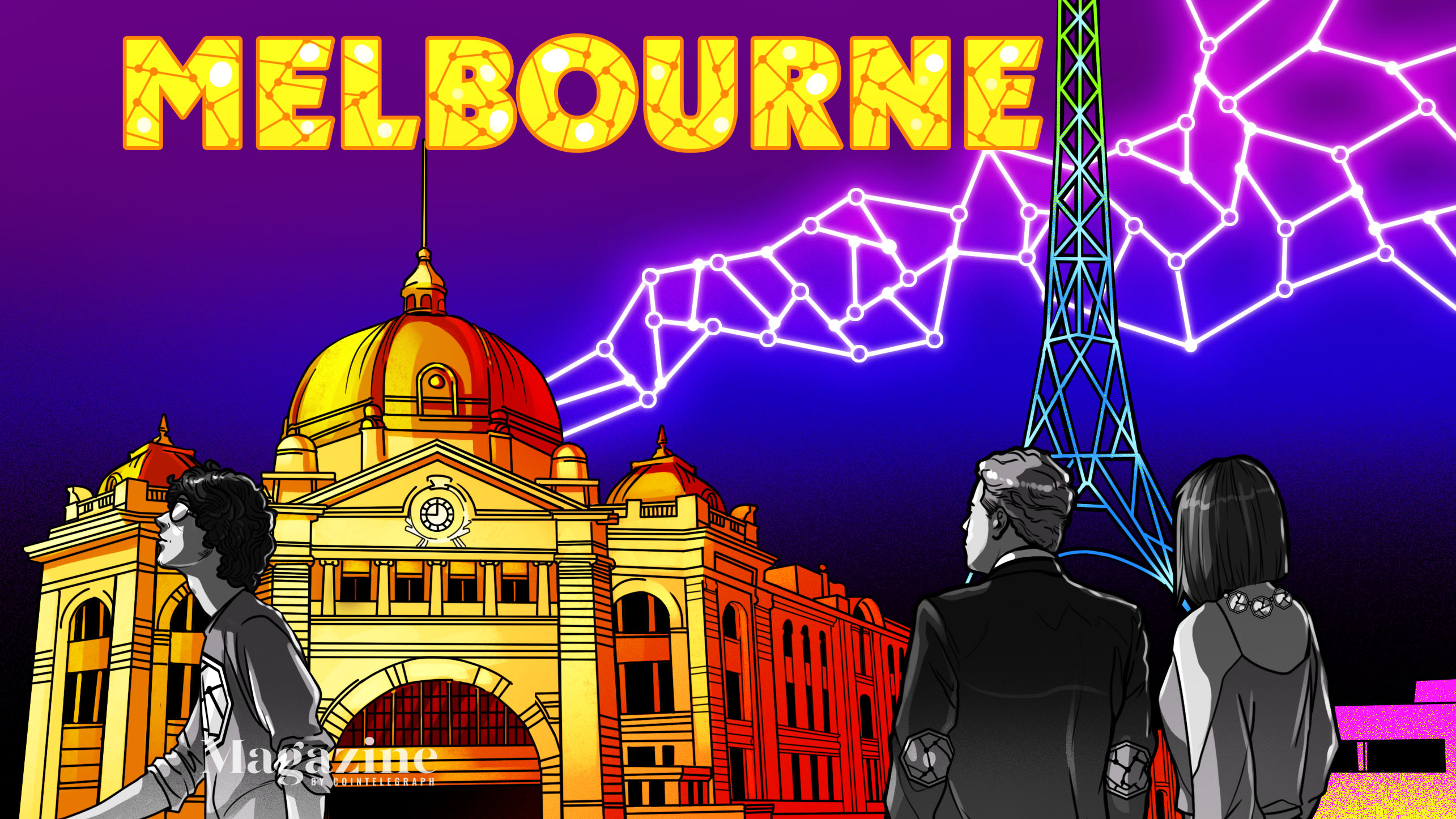 This “Crypto City” guide looks at Melbourne’s crypto culture, the city’s most notable projects and people, its financial infrastructure, which retailers accept crypto and where you can find blockchain education courses — and there’s even a short history with all the juicy details of famous controversies and collapses.

Australia’s second-largest city may lack Sydney’s amazing harbor views, but it makes up for it with a focus on art, sports and culture. There are more live music venues here per capita than any other city in the world, and the city has produced heaps of notable acts, including Nick Cave, Men at Work, The Avalanches and Kylie Minogue.

Located on the southern coast of Australia, Melbourne wasn’t founded until almost 50 years after Sydney, but it quickly became the wealthiest place in the world during the Gold Rush, from the 1850s to 1880s. It’s a very multicultural city, with the 10th-largest immigrant population globally. The city also ranks at number 27 on the Global Financial Centers Index and is home to the Australian Rules football code, the Australian Grand Prix and the Australian Open. It was the filming location for the first Mad Max film alongside Chopper and Animal Kingdom. Politically, Melbourne is more left-wing than any other city in the country and is home to the union movement.

Melbourne embraced cryptocurrencies early on, and a thriving community was built up through regular meetups including Blockchain Melbourne, Women in Blockchain, Web3 Melbourne and futureAUS. Karen Cohen, deputy chairperson of Blockchain Australia, recalls there being a huge influx of newcomers during the ICO boom in 2017.

“The meetup culture was really exciting. We couldn’t get enough space, so people were watching our meetups on Facebook Live because they couldn’t get into the room because it was so busy.”

Melbourne has been home to numerous crypto exchanges since 2013, and a plethora of ICOs were also founded in the city in 2017 and 2018, including CanYa, which operates freelancer platform CanWork, and blockchain voting company Horizon State.

While the pandemic has moved most things online for the past 18 months, Blockchain Australia hosted a series of events at YBF Ventures in the Melbourne central business district (CBD) for the national Blockchain Week earlier this year, and Talk & Trade is now held at RMIT, in between lockdowns.

With live events beginning to reemerge as vaccine rates slowly grind up, YBF Ventures will relaunch its blockchain community meetups, supported by Cohen as the expert in residence for blockchain. “2020, sadly, has been hard with COVID, so it’s had to move online,” she says. “But I think if we were able to meet in real life, it would still have very much a meetup culture.”

Melbournites appear very interested in solving the problem of interblockchain communication, with at least three major cross-chain projects having strong ties to the city. CanYa founder JP Thor helped found the cross-chain decentralized liquidity protocol THORChain, and some of the anonymous local devs from THORChain went on to work on a similar project called Sifchain. Melbourne’s Simon Harman founded another cross-chain automated market maker, Chainflip, along with the privacy project Loki, which is now known as Oxen.

Web 3.0 developer studios Flex Dapps and TypeHuman are located here, as is the white-label blockchain services provider Pellar, whose infrastructure processes 10 million requests a day from around the world. Researchers from the government-run Commonwealth Scientific and Industrial Research Organisation and Monash University invented the MatRiCT technology (licensed to Hcash), which protects crypto from being cracked by quantum computers. NFT digital racehorse game Zed Run just raised $20 million from investors including TCG and Andreessen Horowitz. Algorand also has a noticeable presence in Melbourne, including through the Meld gold platform and Algomint.

Up-and-coming projects include insurance platform Day By Day, onboarding and fraud protection platform FrankieOne and accounting software AEM. DeFi-focused crypto fund Apollo Capital — which is a big investor in Synthetix and Internet Computer, among others — is also based in Melbourne. Apollo’s chief investment officer, Henrik Andersson, co-founded the decentralized pool trading platform dHEDGE and yield platform mStable (and helped out with a few ideas for this guide).

The first Bitcoin ATM was installed at the Emporium in 2014, but there are only 13 Bitcoin ATMs dotted around Melbourne, mostly in big shopping centers. Australian banks have a slightly wary approach to crypto — while many banks are happy to allow users to send funds to exchanges, plenty of users have reported being suddenly debanked, especially those running crypto-related businesses. “They close accounts at will based on crypto use, and we’ve seen that happen, so they’re still not supportive as an industry,” says Cohen.

The New Payments Platform in Australia is something of a competitor to crypto (at least in terms of payments), allowing instant, 24/7 bank transfers using a phone number or email address. Often referred to as PayID, it was cited by the Reserve Bank of Australia as a reason that a central bank digital currency is not needed in Australia just yet. There are hundreds of retailers here in the Blueshyft network (Synthetix founder Kain Warwick’s other project) that accept cash payments over the counter for crypto exchanges.

Where can I spend crypto?

According to Coinmap, you’ll struggle to spend cryptocurrency directly in Melbourne at present, with fewer than 40 retail outlets accepting Bitcoin. (By way of comparison, Ljubljana in Slovenia has half the population but 554 crypto-accepting merchants.) It wasn’t always like this, with swathes of Melbourne cafes and businesses accepting crypto a few years ago, but then removing the option after it failed to take off.

Many retailers used the crypto payment service from TravelbyBit; however, it was dropped after the company merged with Travala in mid-2020. Australia’s oldest, biggest board game retailer in the CBD, Mind Games, gladly accepts Bitcoin via the Lightning Network. You can also learn rock climbing at Melbourne Climbing School, get fit at the women’s-only Fernwood Gym in Bulleen, get your computer fixed at Another World Computer Centre in Coburg or grab some raver gear from Ministry of Style in Collingwood.

If you’re relying on Coinmap’s data, note that some retailers featured have since gone out of business (most likely due to the pandemic), including cult book store Polyester Books, gift shop Vera Chan and various cafes.

Despite the lack of merchants accepting direct crypto payments, you can pay for pretty much everything in Melbourne using crypto via intermediary services that transform it into cash. Living Room of Satoshi lets you pay any Bpay biller or bank account using 18 different cryptocurrencies.

Auscoin was perhaps the most controversial project to emerge from the city. Founded by Lambo-driving souvlaki chain-store owner Sam Karagiozis, the token was created to fund the rollout of 1,200 Bitcoin ATMs. The Aussie version of 60 Minutes dubbed it an “$80 million scam” that was built on nothing more than “grandiose promises,” although the ICO only raised $2 million. Auscoin was ordered by AUSTRAC to cease operations after Karagiozis was charged with trafficking 30 kilograms (66 pounds) of drugs via the dark web.

Elsewhere, up to 200 investors lost about $10 million between them when Melbourne-based crypto exchange ACX mysteriously collapsed at the end of 2019. It was operated by Blockchain Global, whose founder Sam Lee was instrumental in setting up the Blockchain Centre.

Another local exchange that mysteriously folded was MyCryptoWallet. Founded in 2017, National Australia Bank froze its accounts in early 2019. The exchange found alternate banking services and recovered temporarily, but later that year, users found they had lost access to their funds. As of April, they had yet to recover their funds, and Australia’s corporate regulator, the Australian Securities and Investments Commission, was said to be looking into it. Huobi Australia launched in Melbourne in 2018 but quickly shuttered due to a lack of business during crypto winter. Horizon State, a promising blockchain-based voting platform, launched in Melbourne and then moved to New Zealand where it was on the verge of doing great things when a mysterious court case back in Melbourne scuppered the entire project. In a happy ending, the community is resurrecting it from the ashes with a crowd equity raise.

BREAKING: Auscoin founder, Sam Karagiozis, faces charges of trafficking cocaine, ice and other drugs, but he has now been granted bail to attend his brother’s wedding. https://t.co/aGuzMRcYcR

Suggestions for additions to this guide are welcome. Please email: andrewfenton@cointelegraph.com