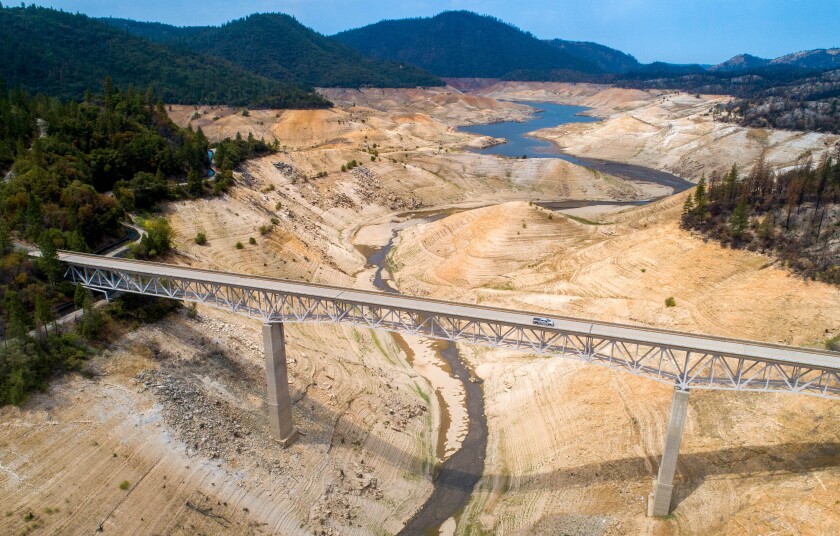 The shutdown of a major California hydroelectric power facility underscores the severity of drought conditions in the state.

The California Department of Water Resources’ Hyatt Powerplant at Lake Oroville, without enough water in the reservoir to operate normally, is offline.

“This is the first time Hyatt Powerplant has gone offline as a result of low lake levels,” DWR Director Karla Nemeth said in a statement Thursday.

The power plant, which can generate up to 644 megawatts, was completed in 1967.

The water level in the Lake Oroville Reservoir is at a record low. This week it sank below the previous record, from 1977.

At 860,000 acre-feet, the reservoir is only at 24% of capacity as of Friday, according to DWR data, and the Feather River won’t bring much more water in until rains return.

“DWR will continue to focus on reservoir operations and water storage management at Lake Oroville to preserve as much water in storage as possible,” Nemeth said, while releasing some water from the base of the dam to maintain river temperature requirements and outflows to the Feather River.

“This is just one of many unprecedented impacts we are experiencing in California as a result of our climate-induced drought,” Nemeth said. “California and much of the western part of the United States are experiencing the impacts of accelerated climate change including record-low reservoir levels due to dramatically reduced runoff this spring.”

The DWR is delivering five percent of requested water supplies to State Water Project contractors who in turn provide water for agricultural and urban use, according to Nemeth’s statement. Deliveries are being met almost entirely from storage at San Luis Reservoir in Merced County.

The state’s electric grid has already been under pressure as high summer heat drives consumption, but Nemeth said the DWR has taken steps in conjunction with the California Energy Commission and grid operator California Independent Service Operator to manage the lost generation from Hyatt.

The emptying of Lake Oroville comes four and a half years after high water levels created a crisis at the Oroville Dam, destroying one of its spillways and raising fears about the dam’s safety. Oroville Dam is the tallest earth-fill dam, at 770-feet, in the United States.