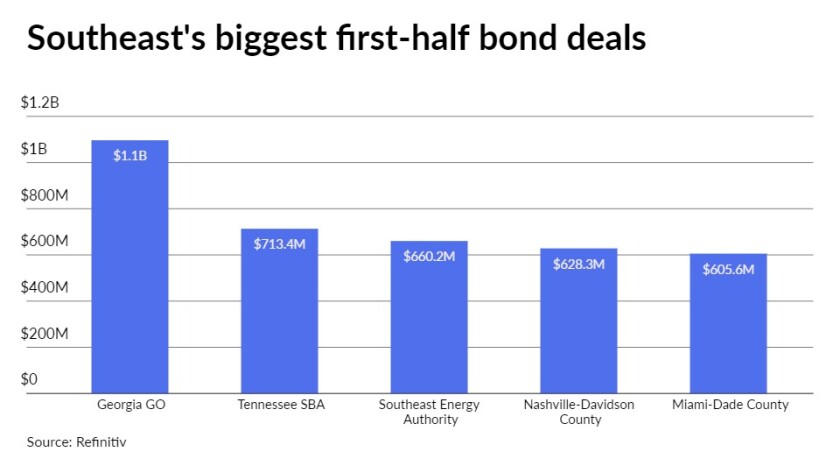 “The top transactions for the region were dominated by state and local general obligation bonds, transportation and energy issues,” John Hallacy, founder of John Hallacy Consulting LLC, told The Bond Buyer. “The sizes of the transactions were somewhat larger than we have seen in the recent past, probably due to the low rates in part.”

The biggest deal in the Southeast in the first half was the state of Georgia’s $1.1 billion competitive taxable and tax-exempt general obligation bond offering on June 8.

The $412.47 million of Bidding Group 1 tax-exempts was won by Wells Fargo Corporate & Investment Banking and the $366.47 million of exempts was won by Citigroup. Morgan Stanley won the two taxable tranches, for $174.57 million and the $153.53 million.
Proceeds from the sale went to provide funding for various state capital projects
such as higher education, K-12 education, public safety, economic development, transportation, water and sewer, public libraries and other uses, according to the bond investor roadshow.

The higher education facilities refunding bonds were priced by Jefferies and saw a record low interest rate of 2.03%. State colleges and universities are expected to see nearly $112 million in net present value interest cost savings over the next 24 years.

Most of the proceeds were used to refund or refinance outstanding bonds with a small portion going toward the purchase of a bio-works facility for the University of Tennessee Health Science Center in Memphis. The deal was rated Aa1 by Moody’s and AA-plus by both S&P and Fitch.

“The pandemic has caused unique challenges for our state’s public colleges and universities,” state Comptroller Jason Mumpower said at the time. “The savings generated by this sale are unprecedented and will have an immediate and lasting impact.”

The third biggest issue was the Southeast Energy Authority’s $660.2 million of commodity supply revenue bonds sold for its Project Number Two, priced by Morgan Stanley on June 15. The authority is a cooperative district.

Proceeds were used to prepay the costs of acquisition of natural gas to be delivered over 30 years. The project participants included public gas utilities in Alabama, Kentucky and Tennessee.

Additionally, the state of Tennessee sold $658.7 million of GOs in June in two series consisting of tax-exempts and taxables. It was the biggest GO deal in the state’s history and netted a true interest cost of 1.41%, the lowest the state has ever received. The bonds were rated triple-A by Moody’s, S&P and Fitch.

Jefferies priced the $490.9 million of taxables while FHN Financial Capital Markets priced the $167.755 million of tax-exempts. Proceeds of the taxables were used to currently and advance refund some of the state’s outstanding GOs for net present value savings. Proceeds of the tax-exempts were used to finance capital projects, retire commercial paper notes and to currently refund some GOs for savings.

“We are right now in an historically low interest rate environment,” Sandi Thompson, director of state government finance, told The Bond Buyer in June, “which is why we are taking advantage of these interest rates.”

The largest of the Southeast’s 11 states, Florida, as usual was its largest source of municipal bonds, with Sunshine State issuers selling more than $8 billion of debt, up 11.7% from the first half of 2020.

Tennessee shot to second place on that table, with issuance volume more than tripling to $5.89 billion in 91 deals from $1.89 billion in 46 deals in the first half of 2020.

Hallacy noted that these states accounted for a fair portion of the volume in the Southeast.

“Mississippi also had a noticeable increase for a state that is fairly conservative in their debt profiles,” Hallacy said.

The top underwriter of munis in the first half was BofA Securities, credited by Refinitiv with $5.24 billion of deals in the Southeast, followed by Morgan Stanley with $4.17 billion, Citi with $3.54 billion, JPMorgan Securities with $3.09 billion and Wells Fargo with $3.04 billion.

Bass, Berry & Sims topped the table among the region’s bond counsel, credited with $2.5 billion of business, all in Tennessee.

New issuance in the Southeast totaled $16.57 billion in 425 deals during the first quarter and $20.56 billion in 472 deals in the second quarter.