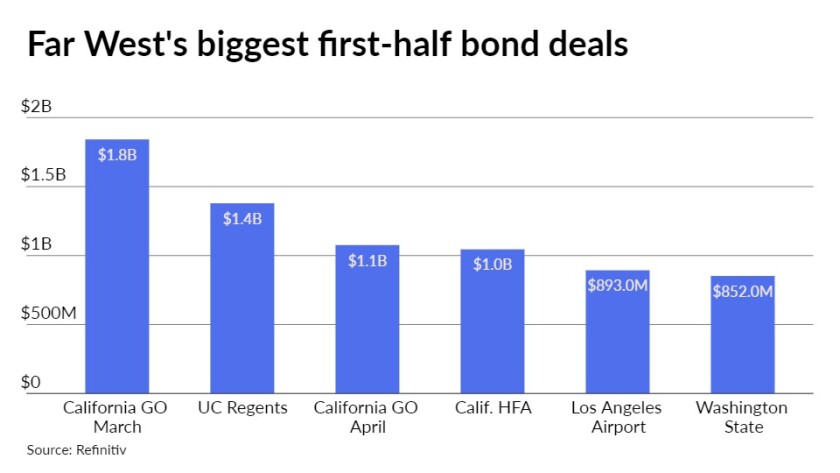 The first quarter saw the biggest spike to $26.8 billion, a 74.4% increase during the same period a year ago, according to Refinitiv data.

The largest issuer in the region in the first half of 2021 was the California state government.

Its $1.8 billion general obligation deal priced by BofA Securities and JP Morgan on March 11 was the biggest in the Far West, and its $1.1 billion April GO deal was third-largest.

The second-biggest issuer was the Regents of the University of California. Its $1.4 billion deal, priced by Jefferies and Citi on February 23, was the second biggest Far West deal of the first half.

The state of Washington was the region’s third-ranked issuer, at $1.6 billion total, according to Refinitiv. Its competitive $862.5 million GO deal in February was the region’s sixth-largest and largest outside California.

“Refunding went down a bit, and new money went down considerably. It’s a function of multiple things,” Schaefer said.

“We had relief money from Washington D.C. in three different programs,” Schaefer said. “We had the pandemic shut us down and severely limit our ability to execute some of these programs. And then we had the most complex budget process I have ever seen in Sacramento.”

Gov. Gavin Newsom spent the federal money and surplus first, before he borrowed, which was the prudent thing to do, Schaefer said.

“This kind of borrowing pattern seems to be consistent with that,” Schaefer said.

Why is the State of California flat when overall volume is up 25%?

Housing accounted for close to $2 billion of that swing and most of it was multi-family housing, Schaefer said. The other one would have been school financing, which was virtually unchanged, as was higher education, he said.

“Housing was a big driver,” Schaefer said. “There is no other real stand-out difference.”

Transportation issuance was up across the region, and in California it doubled, with public transit selling $1.3 billion in 2021, compared to $400 million in the first half of 2020, Schaefer said.

Across the Far West region, education deals had the most volume though the $13.9 billion issued was only a 1.4% increase, according to Refinitiv.

“What we are seeing with our clients is they are issuing a little bit more,” said Adam Bauer, president and chief executive officer of Fieldman, Rolapp & Associates. “With the school clients it’s about same number of transactions as last year.”

Where Bauer has seen a change is there is a bit more focus on communities facilities districts and land-secured deals for schools.

“Schools are one of the largest issuers of community facilities district bonds,” Bauer said.

The increase in home sales has boosted that sector, he said.

“You need a certain number of home sales before you can sell CFD bonds on those projects,” he said.

The bump in home sales, particularly in Southern California’s Riverside County, “has meant that school facility projects move along more quickly, and they have been able to fund school facilities projects,” he said.

He sees it as a function of the classic migration inland to more inexpensive housing markets.

“Another issue compounding that is the hybrid or work-remote scenario where people are more comfortable moving,” Bauer said.

Birth rates have been down statewide slowing enrollment, said Bauer, which might be why education bond sales are generally flat.

While online learning was occurring, parents of pre-K and kindergarten students often made the decision to postpone putting their kids in school for a year.

“It might be, ‘Why not wait one more year, rather than trying to get a five-year-old to watch a computer to attend school,’” he said.

School district refundings have been up for the past three years for Bauer’s firm, and a significant number of those were taxable in response to the 2017 tax bill’s elimination of advanced refundings, he said.

“We have done more taxable transactions then we would have done historically,” he said.

Transportation deals in the Far West saw the biggest increase more than tripling to $7.3 billion from $2 billion, according to Refinitiv data.

The numbers are reflective of what Rudy Salo, a partner in Nixon Peabody’s office, says he is seeing on transportation sales.

“At the beginning of the pandemic, transportation was on pause for six months,” Salo said. “Everyone held their breath, because everyone was at home and no one knew what ridership was going to be.”

In the late summer and fall of 2020, transportation agencies returned in droves to the markets as their projected 2020 numbers came in, Salo said.

“I think the vast majority were refundings,” Salo said. “That has been the case with my clients. I think I’m working on one new money deal, and have had other deals, were maybe a small portion, was new money.”

The Los Angeles Transportation Authority, not a client of Salo’s, has also been issuing a lot, he said.

“In California, the vast majority of transportation is funded by sales tax,” Salo said. “We do have the gas tax that backs Senate Bill 1, (the $54 billion gas tax bill approved by voters in 2017), but transit agencies heavily rely on sales tax. And sales tax revenues went up as more and more people got things delivered at home and as a result of the Wayfair decision.”

Negotiated deal volume rose 24% to $40.6 billion, while competitive deal volume more than doubled to $7.9 billion and private placements dropped by more than half to $1.6 billion.

Citi topped the Far West underwriter rankings, credited by Refinitiv with $6.4 billion, followed by BofA Securities Inc. with $5.99 billion and then Morgan Stanley with $4.9 billion.

Orrick retained its long-time position as top bond counsel with $18.9 billion, followed by Stradling Yocca Carlson with $7.4 billion and then Hawkins Delafield & Wood with $3.4 billion.