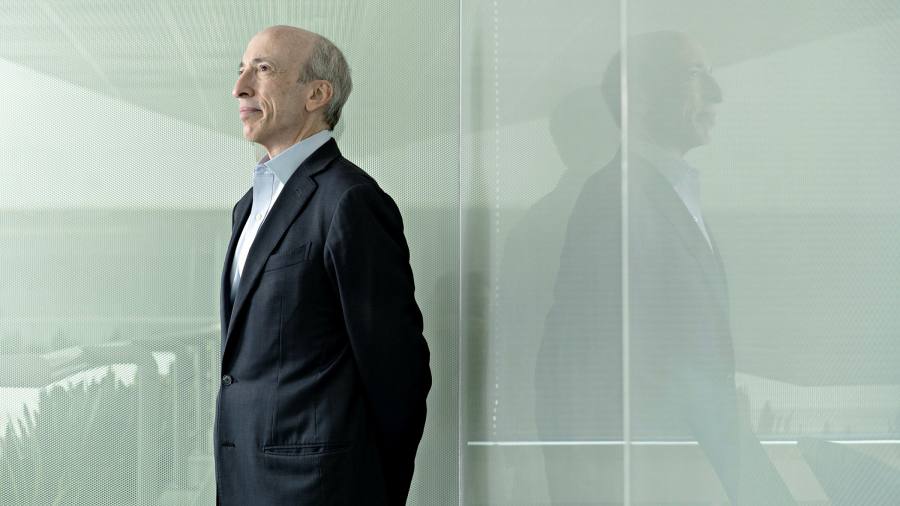 The chair of the US Securities and Exchange Commission is warning that cryptocurrency trading platforms are putting their own survival at risk unless they heed his call to work within the nation’s regulatory framework.

Gary Gensler told the Financial Times that while he remained “technology neutral”, crypto assets were no different than any others when it came to such public policy imperatives as investor protection, guarding against illicit activity and maintaining financial stability.

“At about $2tn of value worldwide, it’s at the level and the nature that if it’s going to have any relevance five and 10 years from now, it’s going to be within a public policy framework,” he said. “History just tells you, it doesn’t last long outside. Finance is about trust, ultimately.”

Gensler expressed disappointment with the industry’s response to his suggestion that trading platforms register with the SEC on the grounds that a sufficient number of cryptocurrencies qualify as securities.

“Talk to us, come in,” he said. “There are a lot of platforms that are in operation today that would do better engaging and instead there is a bit of . . . begging for forgiveness rather than asking for permission.”

Cryptocurrency trading platforms are a big business in the US — New York-listed Coinbase reported a $1.6bn profit in the second quarter. However, it is unclear which US financial regulator is supposed to oversee them. Gensler has called on Congress to make such authority more explicit.

Gensler’s crypto comments carry additional weight because he taught a course on the subject at the Massachusetts Institute of Technology. On Wednesday, he is set to testify on crypto and other matters before the European Parliament’s economic and monetary affairs committee.

Gensler said he had been focusing on cryptocurrency trading platforms because 95 per cent or more of the activity in this “highly speculative asset” takes place in such venues — with investor protections he described as “really sparse”.

He said cryptocurrencies and decentralised finance (DeFi) platforms pose a challenge for regulators because they exist without traditional brokers, to whom laws can be easily applied. Instead, they offer opportunities for investors to deal more directly with each other.

But he said regulators would be able to exercise authority over even supposedly decentralised platforms. He argued that DeFi was “not really a new concept”, but a variation on the peer-to-peer lending businesses that sprouted earlier in the century.

Just as there was “a company in the middle” of peer-to-peer lending, he said, the DeFi platforms have “a fair amount of centralisation”, including governance mechanisms, fee models and incentive systems.

“It’s a misnomer to say they are just software they put out in the web,” he said. “But they are not as centralised as the New York Stock Exchange. It’s sort of an interesting thing that is in between.”

Gensler also reiterated his concerns about Chinese companies listing in the US. He said the listed vehicles were typically shell companies based in offshore locations such as the Cayman Islands that strike service agreements with operating companies in China.

“Is there any real money flowing from the operating company in China to make payments or not?” he said. “There’s a service agreement, and generally speaking those payment entities do not pay dividends.”

The SEC is also finalising rules that would suspend trading in such companies if their auditors do not allow US regulators to scrutinise their books. Under the Trump-era Holding Foreign Companies Accountable Act, those companies have until 2024 to comply with such rules.

Congress is considering bringing that timetable forward by a year. Gensler said the commission would be ready to implement those rules under the accelerated schedule, meaning that Chinese companies could face greater scrutiny as soon as 2023.