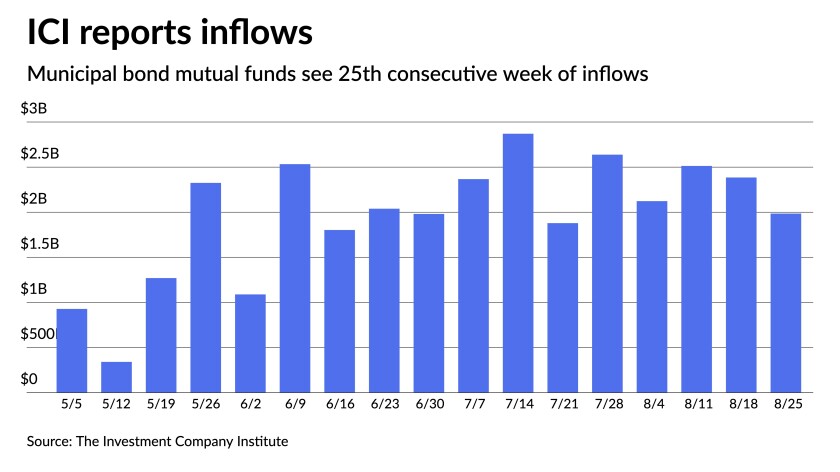 For the 25th week in a row, municipal bond mutual funds saw inflows of nearly $2 billion, bringing the total to $69 billion year-to-date.

Exchange-traded funds saw $378 million of inflows after $513 million and $210 million the two weeks prior.

In late trading, Treasuries were a basis point better and equities were mixed.

Jobs, jobs, jobs
The jobs situation remains in focus, and despite expectations for a 728,000 increase in nonfarm payrolls in the employment report for August, signs are suggesting those projections, and the belief of upcoming improvement in the labor market, could be optimistic.

Wednesday’s data — including the ADP report, which missed expectations and the Institute for Supply Management’s manufacturing survey, which showed employers continue to struggle to attract and retain help — could be concerning, analysts said.

“The ADP and ISM reports both highlight the problems employers are having with filling vacancies and that could start to raise the question of whether the economy will make substantial progress in the labor market over the next few months,” said Ed Moya, senior market analyst for the Americas at OANDA.

“Weakness in the labor market is becoming a consistent theme across the Fed regional surveys,” he added. “Employers are still having trouble filling vacancies and that will complicate the economy from hitting the Fed’s substantial progress goal.”

The issue, he said, “won’t get rectified anytime soon unless wages go up even more.”

“The Delta variant of COVID-19 appears to have dented the job market recovery,” said Moody’s Analytics Chief Economist Mark Zandi. “Job growth remains strong, but well off the pace of recent months. Job growth remains inextricably tied to the path of the pandemic.”

The miss could be “a terrible warning sign ahead of Friday’s jobs report,” said Craig Erlam, senior market analyst, UK & EMEA, at OANDA. “The data piqued the interest of those in the markets but didn’t get much of a reaction, owing to its rare ability to actually provide reliable insight into the jobs report two days later.”

The number “will certainly get people thinking about the potential for a big miss in Friday’s NFP number,” he said.

Bank of the West projects a below-consensus 665,000 nonfarm payrolls jobs added, said its Chief Economist Scott Anderson, “but the disappointing ADP report implies our nonfarm payrolls forecast might still be too optimistic.”

But, Interactive Brokers’ Chief Strategist Steve Sosnick, asserted, “It is important to note that the ADP numbers have been a decent, but hardly foolproof indicator of the more important release two days later.”

He noted, last year, “ADP overshot” the nonfarm payrolls report “probably because the big businesses that use ADP recovered more quickly than small ones,” more typically surveyed for by the Bureau of Labor Statistics for the employment report.

However, “early this year, ADP lagged NFP by a month,” he said in an analysis.

Historically, ADP has not been a good indicator of what the employment report will show, he said. “Over the past 20 years, the correlation stinks. It is essentially random.”

Over the 16 months, albeit which is a limited scope, “it shows a better result,” Sosnick said, with a five-year look offering “a decent but unreliable correlation.”

The markets may understand ADP’s usefulness although it doesn’t necessarily foretell what will come in the employment report, Sosnick said, “because they barely reacted to a major miss this morning.”

Alternately, he said, “it could be that market nihilism means that investors simply don’t care or that the Goldilocks effect will allow investors to create a market-friendly narrative out of statistics no matter what.”

Jason England, global bonds portfolio manager at Janus Henderson Investors, agreed the two reports don’t always mesh. “Last month there was a similar large miss on expectations for the ADP report, yet the NFP print was still a solid number. So, although this does give us some concern that the employment report on Friday could disappoint, the more important concern for us is what impact the Delta variant had on jobs during August.”

Separately, the ISM report showed slightly faster expansion in August, with the new orders and production indexes both rising in the month, but employment fell to a contractionary read of 49.0 from expansionary 52.9 a month earlier, and the prices index retreated to 79.4 from 85.7, its first reading below 80 since December.

The employment read, suggests “a weak print in manufacturing payrolls in the BLS report,” Anderson said.

Perhaps the biggest issue is, “businesses cannot find the people to do the work in the nation’s factories,” he said. “The difficulty finding labor in August is warning sign that Friday’s headline number will not likely get much help from manufacturing payrolls and that a lack of labor remains a challenge to hiring more broadly.”

Wells cut back its expectations for payrolls to a 750,000 rise.

Also released on Wednesday, July construction spending grew an as-expected 0.3% after a revised flat reading in June, first reported as a 0.1% gain.

In the competitive market on Thursday, Fremont Unified School District, California, is set to sell $116 million of taxable refunding bonds at 12:30 p.m.