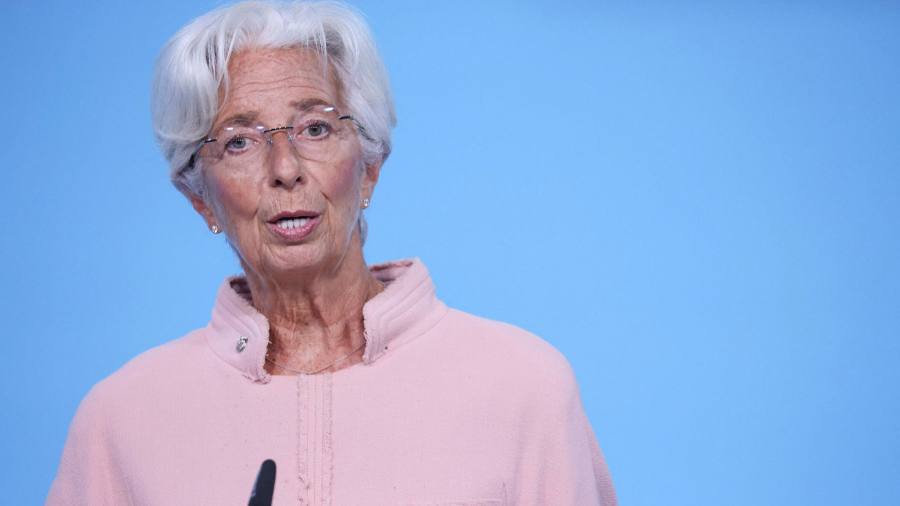 Christine Lagarde said “the lady isn’t tapering”, reassuring bond investors even as the European Central Bank’s president announced it would buy fewer bonds in a sign of confidence in the eurozone’s economic recovery.

After a two-day meeting of its governing council, the ECB said on Thursday it had decided to move to “a moderately lower pace” in its €1.85tn Pandemic Emergency Purchase Programme (PEPP) from the €80bn-a-month level it has run at since March.

“Based on a joint assessment of financing conditions and the inflation outlook, the governing council judges that favourable financing conditions can be maintained with a moderately lower pace of net asset purchases under the PEPP than in the previous two quarters,” the ECB said in a press release.

Following the announcement, Italian 10-year prices rose sharply, recouping recent losses and pushing the yield down 0.07 percentage points to 0.68 per cent. The PEPP has been a boon to the bonds of more indebted euro area countries, which sold off sharply during the height of the coronavirus crisis in markets last year. Bond yields fall as prices rise.

The decision to slow the PEPP, the ECB’s flagship policy response to the pandemic, follows a strong rebound in eurozone growth and inflation, as rising coronavirus vaccinations have helped to end lockdowns and boosted business and household activity.

Lagarde echoed the well-known quote by former British prime minister Margaret Thatcher that “the lady’s not for turning” as she assured a press conference that the unanimously agreed shift to a slower pace of purchases was not tapering.

Most analysts agreed the ECB’s decision is different to other central banks’ tapering because the ECB is not planning to end its bond-buying yet and was only “recalibrating” its pace.

“This is not a tapering decision,” said Elga Bartsch, head of macro research at the BlackRock Investment Institute. “Asset purchases look here to stay as the new policy framework paves the way for looser for longer monetary policy in the euro area.”

In contrast, the US Federal Reserve and the Bank of England have said they plan to start tapering asset purchases this year. Central banks in Canada, New Zealand and Australia have already started to do so.

Lagarde said the ECB’s decision to slow bond purchases reflected that the “rebound phase in the euro area economy is increasingly advanced” with 70 per cent of adults having been vaccinated.

However, she said: “There remains some way to go before the damage done to the economy by the pandemic is undone,” adding that 2m more people were out of work than before the pandemic and many more were still on furlough schemes. “We are not out of the woods.”

Lagarde said the risks for the economic outlook were “broadly balanced” and “price pressures are building only slowly”.

A “fourth wave” of coronavirus infections could still derail the recovery, she said, adding that supply chain bottlenecks that have left carmakers and other manufacturers short of chips and other materials “could last longer and feed through into stronger than expected wage rises”. But she added that there was still little sign of significant wage increases.

The ECB has €500bn left to spend under the PEPP and said the scheme would continue until at least March 2022, or until the council decided “the coronavirus crisis phase is over”. Even at a reduced pace of €60bn to €70bn a month, analysts say the PEPP still has enough firepower to soak up all the new debt issued by governments for the rest of the year.

“Any tapering in the eurozone will likely follow a stop-and-go approach and could last well into 2023; unless the ECB changes its take on inflation even further in the coming months,” said Carsten Brzeski, head of macro research at ING.

Lagarde said a decision on ending PEPP and what replaces it was expected in December. The ECB raised its growth forecast for this year to 5 per cent, while slightly lowering its prediction for next year to 4.6 per cent and maintaining its 2.1 per cent forecast for 2023.

It also lifted its forecasts for inflation, saying it would rise above its target to 2.2 per cent this year, before dropping back to 1.7 per cent next year and 1.5 per cent in 2023.