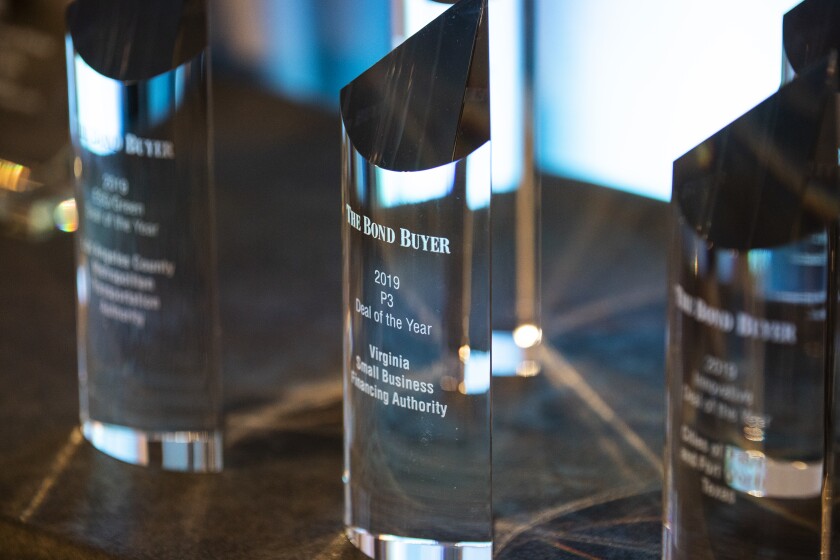 For the 20th year, The Bond Buyer’s editorial board will identify and recognize the year’s most outstanding municipal finance transactions. As always, we will be looking for deals that exemplify the creativity and resourcefulness this industry brings to bear on projects that advance the infrastructure and quality of life in the nation’s municipalities.

After expanding the program a year ago to better represent the full diversity of the communities and public purposes this market comprises, the slate of honored deals will remain at 10, meaning there will continue to be an opportunity for deals of any size, complexity or structure.

The Deal of the Year awards will feature five regional awards for each of our five coverage areas (Northeast, Southeast, Southwest, Midwest, Far West). We will also award honorees in each of the following five categories:

Application forms for this year’s Deal of the Year awards can be accessed at this link. The nominations deadline is Friday, Oct. 8. The 10 winners will be announced in the fall and will all contend for the overall 2021 Deal of the Year Award, which will be unveiled in December.

Please note the eligibility requirements below, and let us know if you have any questions. Good luck!

Attach to your application some photos of the project and a nominating statement of one page or less that explains the following:

Additionaly, for the 11th year, the Deal of the Year ceremony will include the presentation of the Freda Johnson Awards for the public and private sectors.

The awards recognize women serving or who has served in a position in public finance who exemplifies the qualities of a trailblazer, leader, innovator, and mentor.

In addition to the Freda Johnson Awards, NEWPF will also recognize several Trailblazers for their outstanding commitment to the industry as a whole and the role of women within it. The Trailblazers will also be recognized at the Deal of the Year virtual event.

Check back soon for nomination information for these awards.