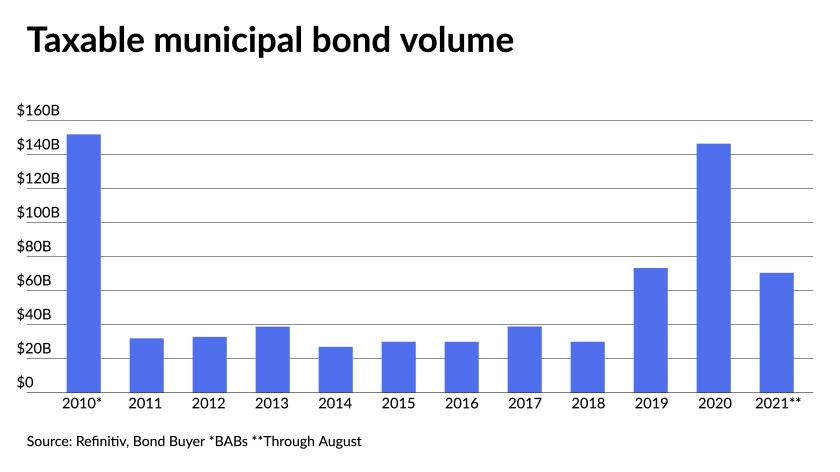 Municipals were little changed ahead of a $10 billion-plus new-issue week as California offered $2 billion of general obligation bonds to retail investors and the market considered the municipal bond provisions offered from Washington.

“The municipal market is relatively unchanged and not fazed by another reversal in the Treasury market, which has been the status quo for September so far,” Roberto Roffo, managing director and portfolio manager at SWBC Investment Company, said Monday.

Municipal 30-day visible supply jumped to $23.45 billion, per The Bond Buyer. This week’s primary calendar, Roffo said, has several deals that will get investors’ attention, the $400 million Illinois deal and the $2 billion California offering.

The California GO sale is a true indication of where demand currently is in the market, according to Michael Pietronico, chief executive officer at Miller Tabak Asset Management.

The recall election was doing little to affect the market for the deal, with levels coming in at expectations.

“Should that deal struggle it could lead to higher yields in the broader market as supply normally picks up this time of year,” Pietronico said, noting that Tuesday’s consumer price report will also be a key focus for the market as inflation concerns remain elevated.

Jeff Lipton, head of municipal credit and market strategy and municipal capital markets at Oppenheimer & Co. agreed there is a hearty appetite for new issues as the end of year nears.

“Munis are entering the home stretch of 2021 and we may start to see some cheapening in the primary market as deals need to get priced heading to year-end,” Lipton said on Monday. “While there is a wall of retail cash sitting on the sidelines, the retail muni investor remains hesitant to commit at current valuations.”

Certain A-rated, non-hospital structures with 4% coupons within a premium range are generating interest, however, according to Lipton.

Meanwhile, even though the four-week moving average of inflows has dropped slightly to $1.4 billion, demand still remains robust, with 27 consecutive weeks of inflows, Roffo noted.

“With a substantial amount of cash on the sidelines and Washington’s obsession with raising taxes, the municipal market should be on strong footing going into the final quarter,” he said.

Participants also on Monday considered the municipal bond provisions included in a $3.5 trillion reconciliation bill Democrats released over the weekend. The bill that would restore tax-exempt advance refunding, create a new program inspired by Build America Bonds, permanently lift the cap on bank-qualified (small issuer) bonds to $30 million, and expand the use of private-activity bonds faces an uphill battle from Republicans and some conservative Democrats on its price tag.

“While there are still many roadblocks to these provisions becoming law, this is a key positive step,” Morgan Stanley strategists said.

Morgan Stanley on Monday estimated that with the new direct-pay bond program, the market could see taxable issuance grow to $50 billion to $180 billion in the first year of adoption.

They wrote a report on the return of direct-pay munis in July in which they said the it would turn taxable munis from “scarce product to viable market,” if the subsidies were high enough.

“Our core conclusion is this: with a BABs program, the taxable market would grow into the dominant form of issuance, albeit slowly at some times and quickly at others,” the July report said. “Our model output shows that more generous subsidies and higher yield ratios (i.e., relative tax-exempt to taxable yields) drive a sharp increase in expected taxable supply.”

Others pointed to the uncertainty the provisions will face as lawmakers debate the $3.5 trillion package. Lipton said it will be generally well-received by market participants, even though final inclusion and program specifics remain uncertain.

The return of tax-exempt advanced refundings may also alter the taxable bond landscape, which is already down in 2021 compared to 2020, he and other participants pointed out.

Looking ahead to Fed
With a quiet week in terms of economic data, analysts are already pondering next week’s Federal Open Market Committee meeting.

Don’t expect a tapering announcement, they say. Morgan Stanley doesn’t expect word of a cutback until the December meeting, while Wells Fargo Securities is hedging its bets between the November and December gatherings.

“The slowdown in the economy has not swayed the Committee’s broad support for tapering this year,” noted Morgan Stanley Chief U.S. Economist Ellen Zentner, “though it is noteworthy that one prominent voice calling for an earlier taper now believes it could happen ‘sometime this year.’”

The deciding factor will be the next two employment reports, she said. This meeting provides another opportunity for the Board to “hash out consensus on the mechanics of tapering,” she said.

Federal Reserve Bank of New York President John Williams conditioned tapering on continued improvement in the labor market, “fairly consistent” with his prior remarks on the topic, Zentner said. Her takeaway was the recent disappointing jobs report and the rise of the Delta variant, won’t derail tapering.

The other speaker that caught Zentner’s attention was Atlanta Fed President Raphael Bostic, whose opinion appears to have softened. He said say taper could happen “sometime this year,” when previously he pushed for taper to come earlier, she said.

The FOMC would have only one more jobs report before the Nov. 2-3 meeting, so that September non-farms payroll number “would need to notably outperform in order to provide more evidence of meeting the ‘substantial further progress’ test on labor,” she said. “We think uncertainty around the data lines up with our call for a December tapering announcement.”

But the employment figures “have been very volatile throughout the re-opening process,” said Wells Fargo Securities Chief Economist Jay Bryson, Senior Economist Sarah House and Economist Michael Pugliese. “It is quite possible August’s miss will be revised higher and/or offset by a stronger number in September. A potential peak in COVID cases, school re-openings and the end of enhanced unemployment benefits all point toward a rebound in job growth in September.”

The August employment report “and the uncertainties imparted by the recent surge in COVID cases on the economic outlook mean that an announcement of tapering at the upcoming meeting is quite unlikely,” they said.

Despite this, progress toward maximum employment continues. “Unless the economic recovery is completely derailed over the next few months,” they said, “we believe a taper announcement will be forthcoming at either the November or the December FOMC meetings.”

The Sept. 21-22 meeting also offers a new Summary of Economic projections, which will extend the forecasts into 2024. “The September dot plot could easily reveal a median of three hikes in 2024, with upside risk,” Zentner said. “According to our rates strategists, the bond market is pricing in a more shallow path. That said, three hikes may not be a surprise, though it would certainly catch attention. However, a dot plot that shows a median of four hikes in 2024 is bound to startle the complacent investor.”

The dot plot will be interesting, she said, with “a tug-of-war among the hawks and doves around 2024.” The seven officials that expect hikes next year “are bound to see the need for a much steeper path two years on. Their dots could yank the median higher in 2024.”

But the five doves who expect no increases through 2023, if they see “liftoff in 2024, they will no doubt mark down a more gradual start, exerting a gravitational pull on the median.”

For 2022, she said, “the median remains at zero.” With the June SEP providing “a major shift in the dots forward into 2022,” the following dot plot “tends to be more stable.”

If GDP expectations slip, it could “cause some dots to shift lower,” Bryson, House and Pugliese said. “But forecasts of lingering inflation next year may lead some members to conclude that the pace of tightening that they expected three months ago is still warranted.”

Further, the data released in the interim “should not have swayed the path of policy,” Zentner said. But, she noted, just two Fed officials moving higher could bring the median for 2022 up to 0.25%.

“Regardless of the outcome, Chair [Jerome] Powell is likely to talk down any hawkish move in the dots, reminding folks that the outlook is highly uncertain and the dot plot should be taken with not just a grain but a barrel of salt,” she said.

Powell’s smoothing will be easier for 2024. “Should the median move higher in 2022, however, Chair Powell will have to pound his fist on the table to show that tapering has nothing to do with the timing of the first rate hike,” she said. “It’s important for the center of the Committee to continually remind financial markets of that separation principle and ensure that it remains effective.”

Separately, consumer’s inflation expectations are climbing, according to the Federal Reserve Bank of New York’s Survey of Consumer Expectations.

More than one in three respondents expect the unemployment rate to rise in the next 12 months, while earnings and spending growth slowed.

A year ago, the government posted a $200.0 billion deficit for the month.

The California Municipal Finance Authority (//A-/) is set to price on Thursday $120 million of HumanGood senior living revenue bonds. Ziegler

The California Municipal Finance Authority (//A-/) is set to price on Thursday $120 million of HumanGood senior living revenue bonds. Ziegler.