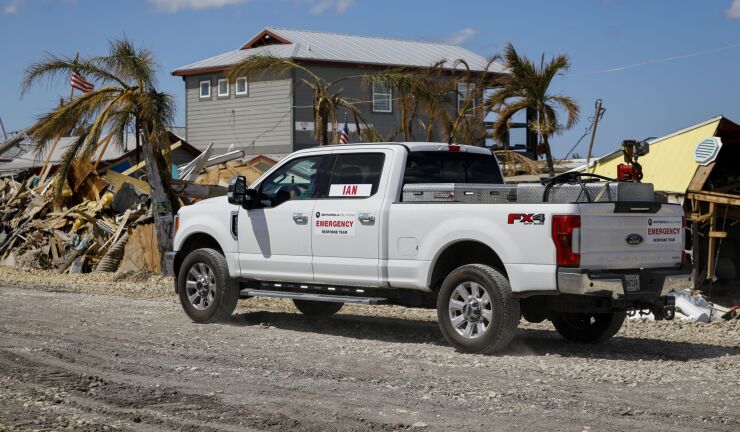 After a year in which two hurricanes pummeled Florida, state lawmakers have scheduled a special session on the state’s troubled property insurance market.

“Next month, the Florida Legislature will convene in a special session to address the challenges still facing our state’s insurance market and ensure residents whose homes are uninhabitable get a break on property taxes,” State Senate President Kathleen Passidomo, R-Naples, said in November. “Hurricane recovery is just one of many issues we must tackle in the weeks and months ahead.”

Citizens is the state-created insurer of last resort, providing property insurance to customers the private insurance market won’t cover because the high likelihood of losses makes such business uneconomical.

Both entities are sizable players in the municipal bond market.

“They are both in very strong financial position and will be able to pay or reimburse insured losses without difficulty,” Ben Watkins, director of the Florida Division of Bond Finance, told The Bond Buyer in November.

It will also consider tax relief for storm victims.

In an address at an organizational meeting, House Speaker Paul Renner said he has written letters to the three credit rating agencies which rate Florida’s debt demanding they “drop the politics and return to objective, financial criteria, universally recognized to measure a state’s credit rating.”

Renner claimed the same ideologies that have “pushed indoctrination at the expense of education” have also co-opted Wall Street with political demands branded under the ESG umbrella.

“Just last year, credit rating agencies began requiring our state to provide data to measure our compliance with ESG’s political dogma,” Renner said. “ESG scoring will soon become a factor in our state’s credit rating, meaning fiscally irresponsible states, like California, could receive a better credit rating than Florida simply because they embrace ESG’s political agenda. We are not going to let that happen in Florida!”

ESG demands that companies adopt “radical environmental and diversity goals” and uses a scoring system to reward or punish companies based on their compliance, he said.

“These radical goals are causing a politically induced energy crisis, raising prices at the pump and our electric bills,” Renner said in the wake of a year of high worldwide crude oil, fossil fuel and gasoline prices driven in part by Russia’s war on Ukraine.

Renner wants to bar state retirement systems from being allowed to factor risks posed by climate change in their investment choices.

“Those in the Florida Retirement System must be confident that we are protecting their money.  I want those with a state pension to know we will never allow your life savings to be put at risk by the political interference of ESG! We’ll expose ESG for what it is, an ‘ideological sham’ that hurts all of us,” he said.

“There’s clearly a tug of war around these issues, but when it was called ‘corporate social responsibility’ years ago, there was little flap,” Natalie Cohen, founder of The Public Purse and National Municipal Research, told The Bond Buyer.

“One academic study from about 10 years ago found that companies with strong CSR tended to achieve higher ratings from the rating agencies (and hence less borrowing cost),” she said. “The authors defined this as ‘community relations, diversity, employee relations, environmental performance and product characteristics.'”

She noted politics are in play.

“There are also numerous law firms that have opined that taking ESG or CSR into account when making investments does not violate fiduciary responsibility,” Cohen said. “Much of the outcry is from the oil and gas producers and letters are from the governors and other elected officials they support.”

State lawmakers will also have to deal with the upcoming dissolution of the Reedy Creek Improvement District, which is set for June 1.

The Legislature approved a bill in April that would result in the dissolution of all independent special districts created before 1968.

The bill’s authors and DeSantis made it clear it was intended to punish the Walt Disney Co., which Reedy Creek was created to serve, for its opposition to the Parental Rights in Education Act, banning public school instruction for children through grade 3 about sexual orientation or gender identity.

“The maintenance of the rating watch negative reflects the lack of clarity regarding the allocation of RCID’s assets and liabilities, including the administration of revenues pledged to outstanding bonds and the servicing of debt in the event of dissolution,” Fitch said.

“We understand our responsibility to bondholders and investors and take that seriously,” Watkins said in a Bond Buyer podcast in August.

According to a published report, the state lawmaker who authored the Reedy Creek dissolution bill is open to reconsidering it now that Disney is under new management.

That would have the secondary impact of getting lawmakers out of figuring out exactly how to replace Reedy Creek, given the district’s scheduled June 1 dissolution and the lack of an existing plan to fund its activities.

“I see it as much ado about nothing in the end,” John Mousseau, president and CEO at Cumberland Advisors, told The Bond Buyer.

“The governor looks like he took on a corporation. Helps his politics. He doesn’t want them to leave. They don’t want to leave. They will fix this with some changes or a new-but-same district and everyone goes back to making money,” he said.

Disney had planned to relocate its Imagineering group that creates its theme park and other live experiences from Glendale, California, to central Florida, beginning in 2021.

“That move has now been postponed until 2026 and at least one Florida legislator believes the delay has to do with the RCID dispute,” Cohen said.

“Maintaining the status quo could take some face-saving actions — perhaps the age-old approach of postponing the dissolution and creating a special commission to assess the costs and benefits of the law,” Cohen said. “The law was passed in 72 hours and never had a thorough fiscal impact analysis in the first place.”

Mousseau said now that the governor’s race is finished, DeSantis may be looking ahead to 2024 and a possible presidential run.

“Now that the election is over, like most politicians, I would think the governor would move a little more to the center, with his eyes on a bigger prize in two years.” he said.

Rumor has it that Dogecoin could shift to proof-of-stake — What does that mean for miners?
Stocks making the biggest moves after hours: Snap, Electronic Arts, Advanced Micro Devices and more
NYSE says Tuesday’s trading glitch due to ‘manual error’
Stocks making the biggest moves after hours: Meta, Align Technology, e.l.f. Beauty and more
Aave deploys v3 on Ethereum after 10 months of testing on other networks