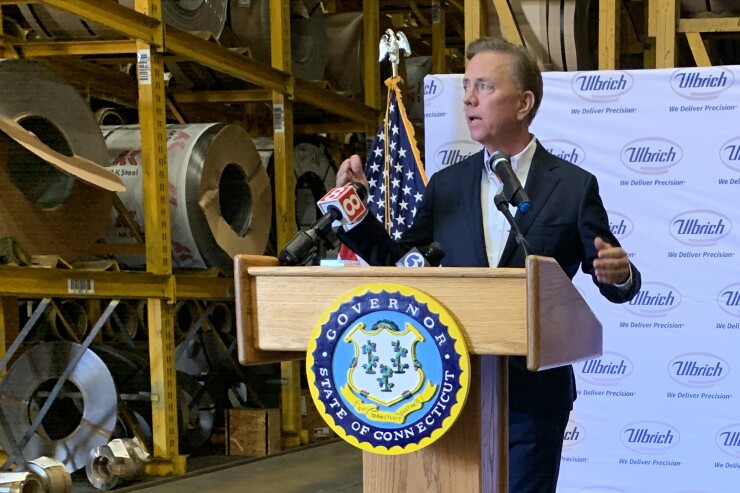 The Connecticut Office for Policy and Budget Management’s recently announced forecast for fiscal 2023, which runs through June, projects general fund revenue of $23.2 billion. Compared to December’s projections, revenues are up $265.3 million and expenses are down $59.4 million.

That $324.7 million total would flow into the budget reserve fund, bringing it to $3.19 billion.

Personal income tax, corporation tax, and federal grant projections were all up.

In February, Gov. Ned Lamont is due to present state lawmakers with a biannual budget proposal for fiscal years 2024-2025.

Lamont said his budget would also allow the state to extend an earned income tax credit that benefits lower-income families.

“The era of the permanent fiscal crisis in Connecticut is over,” he said, cautioning legislators not to forget how they got to this point. Connecticut’s paid off debt and increased reserve rates over the last few years, something Lamont attributes to several fiscal guardrails instituted in 2017 he wants to extend.

Then, authorities instituted caps on state spending, appropriations, and credit sales protected by a “bond lock” provision that requires a covenant be added to any credit issued by the state that guarantees those caps remain unchanged for a five-year period after sale. The current provisions end in June, and Lamont has expressed a desire to extend that over the next two years.

Opponents of the”bond lock”say it stifles the state’s development, instead of helping it.

“It is increasingly clear that the long-term effects of these measures will be deleterious to the well-being of Connecticut’s children and families and to our state’s economic prosperity,” said a policy report published by Connecticut Voices for Children, a New Haven policy think tank. “It is in practice an austerity lock, ensuring that Connecticut remains in a permanent state of fiscal deprivation, starving our schools, health systems, and infrastructure of crucial investments,” it said.

The organization recommends the repeal of the bond lock and spending caps.

The Federal Reserve is likely to hike interest rates again. What that means for you
Salt Lake City, Dallas And Denver Are Expected To Have The Biggest Inventory Gains In 2023
Munis steady, FOMC meeting leads to paltry new-issue calendar
Puerto Rico’s December revenues 28% ahead of projections
Bitcoin mining revenue jumps up 50% to $23M in one month