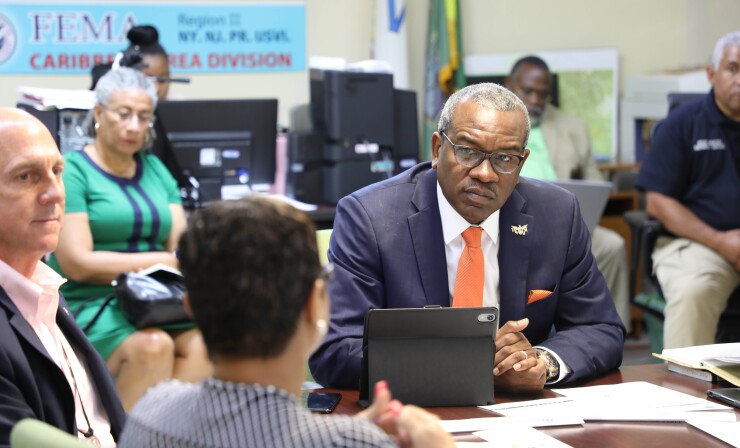 The U.S. Virgin Islands’ beleaguered Water and Power Authority blocks development of the island, according to Gov. Albert Bryan Jr., who committed to fixing the authority’s problems in his current term, which ends January 2027.

The authority’s “ongoing financial and operational woes … are an impediment to any developmental progress we hope to make as a community,” Bryan said in his annual state of the territory speech to the Virgin Islands’ Senate Monday.

According to a WAPA posting to the EMMA web site, as of April 30 WAPA had $205 million in bonds outstanding and $2 million in unamortized bond premiums. It had $341 million in long-term debt and $1.098 billion in total liabilities.

WAPA is installing four generating units at the Randolph Harley Power Plant on St. Thomas, Bryan said. “Once operational, these units will immediately improve the efficiency and reliability of the St. Thomas power plant, and the resulting operational savings will translate into lower electric rates for everyone.”

Negotiations for solar power on St. Croix are nearly complete, Bryan said. The authority has “identified qualified firms that can deliver between 50 and 100 percent of St. Croix’s power from solar for a fraction of the current cost.”

He expects solar farms to be running 12 to 18 months from signing of power purchase agreements.

“Equally promising is the realization that we also have developers that have the capacity to develop similar projects in the St. Thomas/St. John district,” the governor said.

Progress with WAPA is “jeopardized” by its ongoing dispute with Vitol, the owner and operator of the authority’s propane terminals, and until November its supplier of propane.

“We are optimistic that we will be able to announce a positive resolution in short order,” he said.

But Sen. Ken Gittens noted Bryan’s previous state of the territory address said “the government was working to renegotiate WAPA’s debt to Vitol, so I had hoped we would hear the result of those efforts by now.”

The number of visitors to the islands increased 116% in 2022from 2021, Bryan said. The unemployment rate declined.

Bryan said he expects an influx of federal construction spending in the next 10 years, as the number of hotel rooms is steadily moving toward pre-2017 hurricane season numbers.

Gittens said he was concerned that Bryan did not mention the former Limetree Bay Refinery, which is not operating. “Given the huge potential on our economy and environment, I did expect an update as to the status of the refinery.”